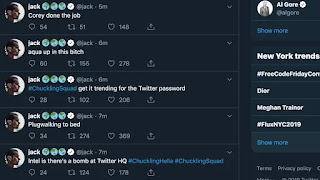 Jack dorsey the CEO of twitter had his verified account hacked by some racial slurs.the account of Twitter CEO Jack Dorsey sent out approximately 20 out-of-character tweets, which included the apparent names of a hacking crew.
Among the tweets were allusions to a bomb threat, a link to the Discord chat server of the hacking crew, and a retweet reading “nazi germany did nothing wrong.” While it’s bad optics for the CEO of a tech company to be publicly hacked, it also opens up confidentiality concerns if Dorsey’s Direct Messages are now visible to outside parties.
These unauthorized tweets all display as being sent via Cloudhopper, a messaging infrastructure company acquired by Twitter in April 2010, which enabled users to easily connect to SMS carriers around the world. (At the time, Twitter said that it was processing close to a billion SMS tweets per month.).
Twitter VP on communication confirmed the breach and says they are working to trace the hackers and also remove the tweet and retweets.

MTN Gameworld – Here is everything you need to know

MTN YouTube Video Streaming Bundle – Here is everything you need...

How To Migrate to Glo Yakata |Glo Yakata Migration Code

How to check MTN, Glo, Airtel and 9mobile Number

ABOUT US
OgbongeTech is a blog for Technology news,Smartphones and other Gadget reviews,specs,tech tutorials.The Blog also covers Online Services as well as Prices of Mobile Phones and other Gadgets.
Contact us: contact@ogbongetech.com
FOLLOW US
© Copyright 2019 - Ogbongetech Inc - All rights reserved.
MORE STORIES

42 SECRET CODES THAT UNLOCK HIDDEN FEATURES ON YOUR PHONE 2019